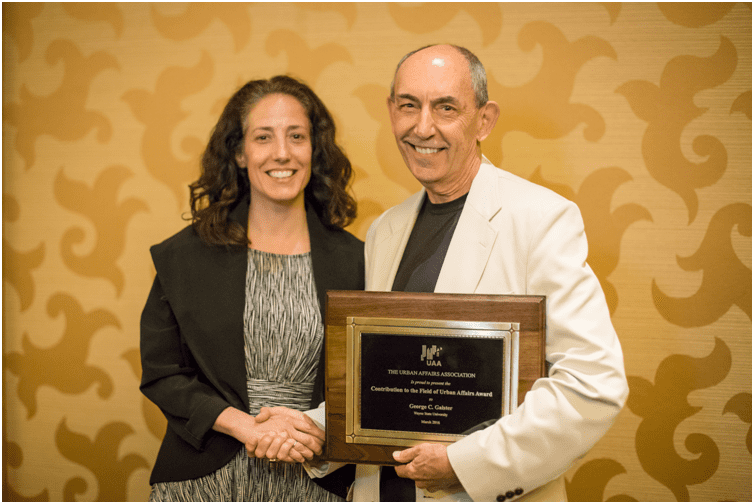 The reach and impact of George Galster’s work has been truly remarkable. His creative and methodologically sophisticated scholarship has challenged conventional thinking and helped shape the field of urban affairs, most notably in the areas of: racial and economic segregation, neighborhood effects on individual outcomes, and the impact of subsidized housing and community development investments on surrounding property values.

In addition to his scholarship, George Galster has been a generous mentor to students and junior faculty. He has also served with distinction on numerous advisory boards, academic journals, and on the governing board of this organization. George Galster’s work is a continual source of learning and inspiration. His profound influence in the field, particularly in housing and community development, will be felt for years to come.

George Galster earned his Ph.D. in Economics from M.I.T. and now serves as Clarence Hilberry Professor of Urban Affairs at Wayne State University. Dr. Galster has held academic positions at the Universities of: Harvard, Berkeley, North Carolina, Amsterdam, Delft, Glasgow, Oslo, and Western Sydney, among others. He served as Director of Housing Research at the Urban Institute in Washington, DC before coming to Wayne State University in 1996. He has published 140 peer-reviewed articles, 8 books and 32 book chapters on topics ranging from metropolitan housing markets, racial discrimination and segregation, community change, reinvestment, lending and insurance patterns, neighborhood effects, and urban poverty. He has been a consultant to the U.S. Department of Housing and Urban Development, U. S. Department of Justice, numerous municipalities, community organizations, civil rights groups, and organizations like Fannie Mae, American Bankers Association and National Association of Realtors. He has served on the Consumer Advisory Council of the Federal Reserve’s Board of Governors, National Academy of Science review committees, and numerous other positions in community service. He has provided housing policy consultations to the governments of Australia, Canada, China, Scotland, and the U.S. The Urban Affairs Association placed him on their Service Honor Roll in 2014.