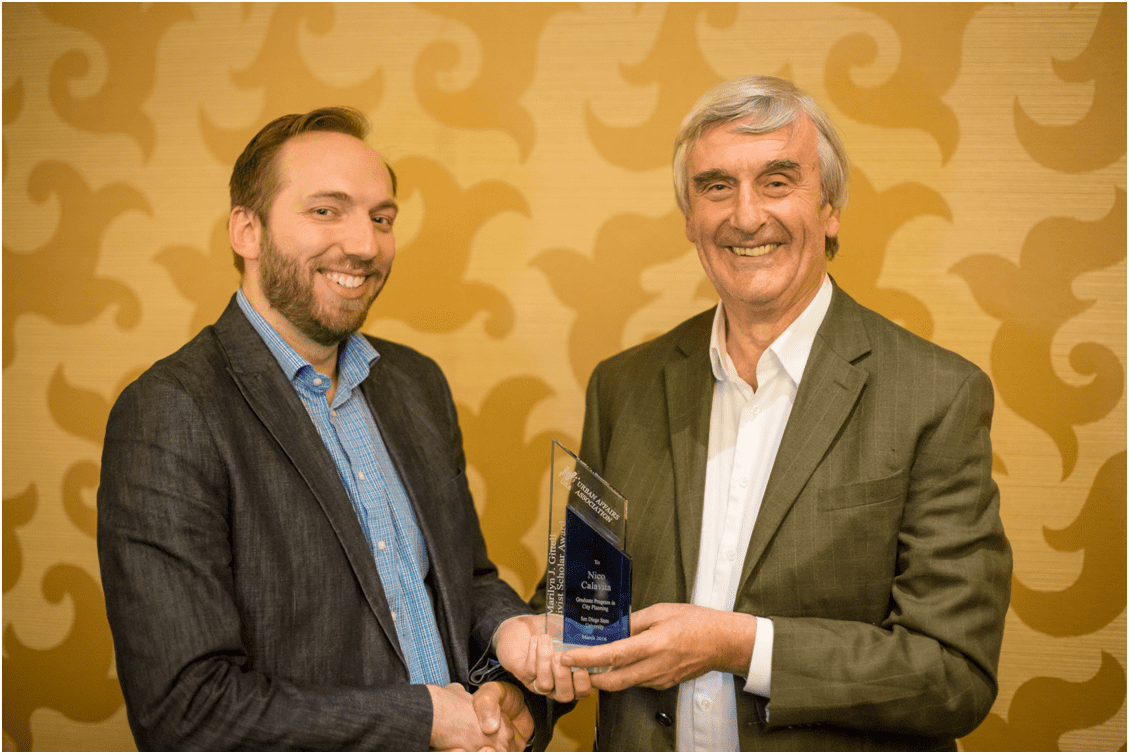 Dr. Calavita’s record of scholarship and engagement reflects a clear commitment to confronting issues of direct concern to urban residents and their communities.  Such a record shows a clear respect for equity, an understanding of complex social relationships, in-depth knowledge of political and economic realities, tenacity, and finely honed analytic skills. The words of one nominator capture the substance of his activities:

His research and publications on housing policies, such as Housing Trust Funds, Housing Linkage Fees, and especially Inclusionary Housing (IH), are based on his direct involvement with local community based organizations and residents, in attempts to implement those programs in the City of San Diego, as well as other parts of California. He was central to the adoption of IH for the 12,000-acre Future Urbanizing Area of the City of San Diego in 1993. He also was co-founder of the San Diego Affordable Housing Coalition that was instrumental in the passage of IH in 2002 in the rest of the City of San Diego.

Dr. Calavita has been a tireless advocate for social justice in the San Diego area and for bridging theory and practice to create affordable housing policies and foster integrated communities. In an effort to outreach to residents, professionals and academics, he has published over two dozen Op-Ed pieces that have appeared in the San Diego Union, Los Angeles Times and other newspapers, as well as published in professional outlets such as the American Planning Association’s Zoning Practice and Planning, and academic journals including the Journal of Urban Affairs and the Journal of the American Planning Association. These works inform community members, public officials, and Dr. Calavita’s students by grounding dialogue in evidence-based research, while acknowledging the political context of community decision making.

Dr. Calavita has not only been embedded in community efforts to provide affordable housing, he has also held leadership positions in the San Diego region.  He has served on numerous committees for the City of San Diego, including Chair of the Housing Trust Fund Board of Trustees, and for the regional agency SANDAG, as well as the boards of City Heights and the Jacobs Foundation.

“In a period that has seen increasing income inequality in the United States, Dr. Calavita has worked as both an academic and an advocate, applying a keen analytical eye to key issues such as affordable housing and urban planning,” commented Eric Moran, Director of Social Science Journals at SAGE Publishing. “He has taken his scholarship to the next level, explaining why his findings matter to regional and state policymakers, and examining how the issues he studies in one locale are applicable or different in other Western urban contexts. SAGE Publishing is proud to honor Dr. Calavita as the 2016 Marilyn Gittell Activist Scholar Award winner.”

Since retiring from his faculty position at San Diego State University, Dr. Calavita has continued his housing policy advocacy work in the Bay Area where he now lives.

Dr. Calavita’s record of achievement has generated both concrete advancements in the areas of affordable housing and equitable planning, as well as influencing policymaking in San Diego, the State of California, and other urban contexts.  His record serves as an inspiring model for future generations of policy advocates, community leaders, and activist scholars.

Nico Calavita recently retired after 30 years of teaching in the Graduate Program in City Planning at San Diego State University. Calavita’s areas of interest include affordable housing and community development, growth management, the politics of growth and comparative planning. In his work, research and community service – based on equity planning principles – are inextricably linked. For example, his research and publications on housing policies, such as Housing Trust Funds, Housing Linkage Fees and Inclusionary Housing are based on his direct involvement in the attempts to implement those programs in the City of San Diego, including being Chair of the City of San Diego Housing Trust Fund Board of Trustees during the 1990s. Over the years he has published many Op-Ed pieces in the San Diego Union and LA Times, on affordable housing, equity planning and smart growth. He is the author with Alan Mallach of “Inclusionary Housing in International Perspective: Affordable Housing, Social Inclusion, and Land Value Recapture” published in 2010 by the Lincoln Institute of Land Policy.