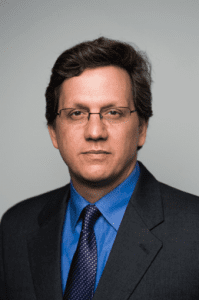 During the conference, awards were presented in recognition of outstanding scholarship and service. Among those honored was Gavin Shatkin (Northeastern University), who was awarded the 2018 Best Book in Urban Affairs Award-Honorable Mention, for Cities For Profit: The Real Estate Turn in Asia’s Urban Politics. Fifty-seven books were nominated for the Best Book in Urban Affairs Award this year. The authors of these books represented several different disciplines and a variety of urban topics.

Gavin Shatkin is Associate Professor at the School of Public Policy and Urban Affairs at Northeastern University. His research focuses on urban politics, real estate development, hazard mitigation, and shelter and infrastructure delivery in Asian cities. His articles have appeared in leading journals in urban policy and planning and Asian studies, including Environment and Planning A, Cities, Urban Studies, the International Journal of Urban and Regional Research, and Pacific Affairs. His edited book, Contesting the Indian City: Global Visions and the Politics of the Local (Wiley-Blackwell, 2013) examines the changing political economy of post-liberalization Indian cities. He is also author of Collective Action and Urban Poverty Alleviation: Community Organizations and the Struggle for Shelter in Manila (Ashgate, 2007). Professor Shatkin was a Fulbright-Nehru Scholar in Kolkata in 2010, and also spent time in 2010 as a Senior Research Fellow at the Asia Research Institute at the National University of Singapore. He is currently the Director of the MS in Urban and Regional Policy and Director of the Asian Studies Program at Northeastern University.

The Urban Affairs Association (UAA) is the international professional organization for urban scholars, researchers, and public service providers. UAA is dedicated to creating interdisciplinary spaces for engaging in intellectual and practical discussions about urban life. Through theoretical, empirical, and action-oriented research, the UAA fosters diverse activities to understand and shape a more just and equitable urban world. UAA sponsors the Journal of Urban Affairs, a refereed annual journal, publishing manuscripts related to urban research and policy analysis of interest to both scholars and practitioners. UAA also sponsors Upsilon Sigma – The Urban Studies Honor Society, an international, multidisciplinary honor society dedicated to recognizing and encouraging excellence in scholarship, leadership, and engagement in urban studies and related fields. The Urban Affairs Association hosts a conference each spring in an urban center. The conference program features both topics of institutional concern and those related to urban issues.